The initial goal of this study was to establish a background survey of plant and animal species in an altered abandoned area destined for development within the next year or two. The old field selected, stretches west from the corner of Burnhamthorpe and a closed stretch of 4th Line ending at Oakville’s Old Regional Landfill Site, right at the location known as Glenorchy (see Figure 1). 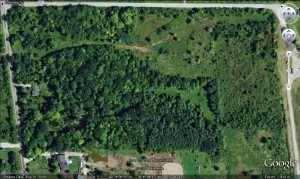 The anthropogenic field is the open area in the top centre (north is towards the top-left corner). It is flanked by woodlots to the north west and a thicket swamp to the east-south east. The road on the top is 4th Line, Burnhamthorpe to the left and the Old Oakville Landfill access road to the right. Google TM image August 31 2009 ©.

It was noticed that the area of study contained several distinct landscape units: a pine plantation, two forest remnants (woodlots), one open field, two marshes, and a deciduous – shrub thicket swamp complex, as well as, the remnants of the original hedge ecotones delimiting the old agricultural field boundaries. Within the open field one could easily recognize a number of distinctive vegetation communities (tesserae) that fully or in part would be link to different man made alterations of the original agricultural field landscape unit. The man made open field landscape was an old agricultural field that became filled with clay and construction waste to different heights and containing a significant patch of sand, rock and rubble mounds, as well as ditches. It was also realized that the swamp and marshes were the result of human alterations to the flow of water through the area after the construction of the neighbouring Old Oakville Landfill Site.  The survey was therefore extended to determine the extent of the different micro-habitats, their floristic communities and their respective soil characteristics. The floristic tailings, or tesserae observed can be expected to be the product of the micro-habitat diversity generated in the area by human action and, one would also expect, the vegetation patterns are overlapped by the patterns of open field succession. If so, these areas form a mosaic of discrete eco-functional units (ecotopes) each with interconnected but with distinct successional histories 1.

Conservation efforts  have focussed on species defined under the Endangered Species Act 2007 and the Ontario’s Species at Risk List. The limitations of this approach has been three fold: 1) it focuses on the species rather than the habitat type and extent needed – not only for the particular endangered species, but also for its associated flora and fauna necessary for a functional ecosystem where these and other species can at least maintain sustainable populations; 2) It has enhanced the susceptibility of these species to extinction by making them targets of eradication to avoid environmental legislation to land use development; and 3) In the long run it has lead to a weakening of environmental legislation as a response to development and ideological pressures (see recent amendments to the Endangered Species Act (Bill 73 2012).

The anthropogenic field surveyed serves as an example of an alternative strategy to conservation, one that involves a direct engineering of otherwise impoverished or fragmented landscapes. Very likely the final landscape of these field occurred without a preconceived planning of the nature of the debris and the way and temporal sequence it was decided to be dumped. The process, however, allowed the formation of distinctive habitats promoting the establishment of distinct plant communities. As mentioned before and discussed in detail in this study these plant communities are good examples of very specific habitats capable of promoting in this environment the conservation and sustainability of important eco-functional communities where, in the future, one can expect the establishment of more exquisite and more sensitive species. These communities have integrated and formed a larger landscape unit, now in rapid succession.

Among the unique animal species found in this ecosystem are the Jumping Mouse (Zapus hudsonicus); a species not described in the Species at Risk list, however, being increasingly rare in Halton by the fact that its habitat (wet grasslands and meadows) continue to be eliminated 2 3, and that its populations fluctuate  considerably in response to resource competition with meadow voles (Microtus pennsylvanicus)2.

The Two-lined Leather-wing Soldier beetle (Atalantycha bilineata or Ancistronycha bilineata) 3 ; a species commonly described in the whole of the eastern US, but uncommonly described in Ontario, was present in early spring among hawthorn shrubs. The Goldenrod Leather-wing Soldier beetle (Chauliognathus pensylvanicus) is an uncommon species found foraging among the asters in the dryer meadow areas (compared to the invasive and abundant Common Soldier beetle – Rhagonycha fulva ).

Of interest too, was the considerable frequency and diversity of bird sightings nesting or foraging in the field – with 35 identified bird species. The area also offered favourable bird nesting environments as judged from many nesting locations – this later fact being also the result of the specific architecture of the different landscape components that develop in this area (shrub marshes, hedges, hawthorn/dogwood thickets, cattail marshes, etc.). This field and the immediately surrounding landscape were used by Bank-swallows and a few Barn-swallows among a kettle of Cliff-swallows on a routinely basis.

Have we, as a society, come to understand the scope of the conflict between our sense of entitlement towards unrestricted progress and development, and the limitations of our natural world? Although the attention that most people pay in our communities to our natural world is filled with sentiment and romanticism, it is the product of our own needs, ambitions and wantons that has brought about the environmental and ecological predicaments we find ourselves in. No amount of sentiment or romanticism will bring our landscapes back to that idyllic image of nature that guides our desire and efforts  to try to conserve that feeble remnant of species who’s habitats and ecology we have long destroyed. As meritorious as that perspective was to rise our social consciousness to own the responsibility towards the sustainable use of our resources and of the natural world; it was too, a naïve perspective easily derailed and manipulated by the inherent selfishness that, at the end of the day, governs our simplest and most complex economical decisions.

Perhaps there is no other way than to forge ahead, further studying and understanding ecosystems to be able to engineer back a natural world and be more humble in our perception of what is valuable in nature, not because is familiar and cute, but because is an integral component of the sustainability of the biosphere and by extension, integral to our human nature and survival. That re-valuation is only going to succeed if we become truly knowledgeable of the natural world – again not in an illusory way, and certainly not in a pseudo-scientific way, but by growing up allowing nature to become embedded  in our ways. What gives, maintains, and makes life prosper is valuable what harms it, degrades it, represses it in any way, immediately or in the long term is much less, if not plainly, of no value. None of these environmental and ecological issues are technological, economical not even ethical issues, at the core, they are moral issues.

1           Some of these tesserae are 1) those promoting the growth of willow communities such as the Prairie willow – Salix humilis, Beb willow – S.bebbiana, and Purple Oiser – S. Purpurea; in semi-permanent flooded coves. 2) Heart-leaf willow -S. eriocephala in wet meadow areas – particularly interesting, Sandbar willow lines – S. exigua /S. Interior that correlate with the surface water drainage flows preexistent to the dumping of construction fill and subdivide the open spaces into a mosaic of wet and dry grasslands and meadows (with a total of 104 forb species and 24 grasses and sage species. 3) Along the central part of the property – the higly compacted clay path in and out of the property developed into an alvar-like landscape. 4) The area where apparently the roof of a schools was dumped and covered with sand has formed a well drained area now cover with a lichen/moss crust (similar to those found in central Ontario) and enriched in Smooth Horsetail (E. hyemale var affine or Equisetum laevigatum X E. hyemale var affine ?).

2           While the distribution map of the species is reported extending all the way from the eastern central US and across Canada up to the tundra line, its real territory is limited by suitable habitat within that range. Studies around this species are dated between 1951 and 1986. No recent surveys have been reported since then.

3           Nor the Meadow jumping mouse nor the Two-lined Leather-wing beetle populations are, at the present time, being followed by the Ministry of Natural Resources (NHIC database), a fact that makes judging their status and that of their habitats impossible from a legislative point of view.