This section describes the landscape structure and vegetation survey results of the various polygons between October 2010 and February 2012. The entire Neyagawa Forest Complex, as shown in Figure 1, was divided for the purpose of the study, into several Polygons.  Polygon I delineates the widest, longest and most habitat diverse area of the Neyagawa Forest complex. Polygon II is a highly heterogeneously disturbed small isthmus connecting Polygon I with the rest of the complex. Both these polygons have a hydrology that is different form the other polygons. Polygon I(31.6ha) , II(2.3ha) and IIIa(3.4ha) encompass the largest continuous forest unit of the Neyagawa forest patch covering approximately 37.5 ha. Polygon IIIb and Polygon IV encompass 9.7ha, and Polygon V another 4.7ha. 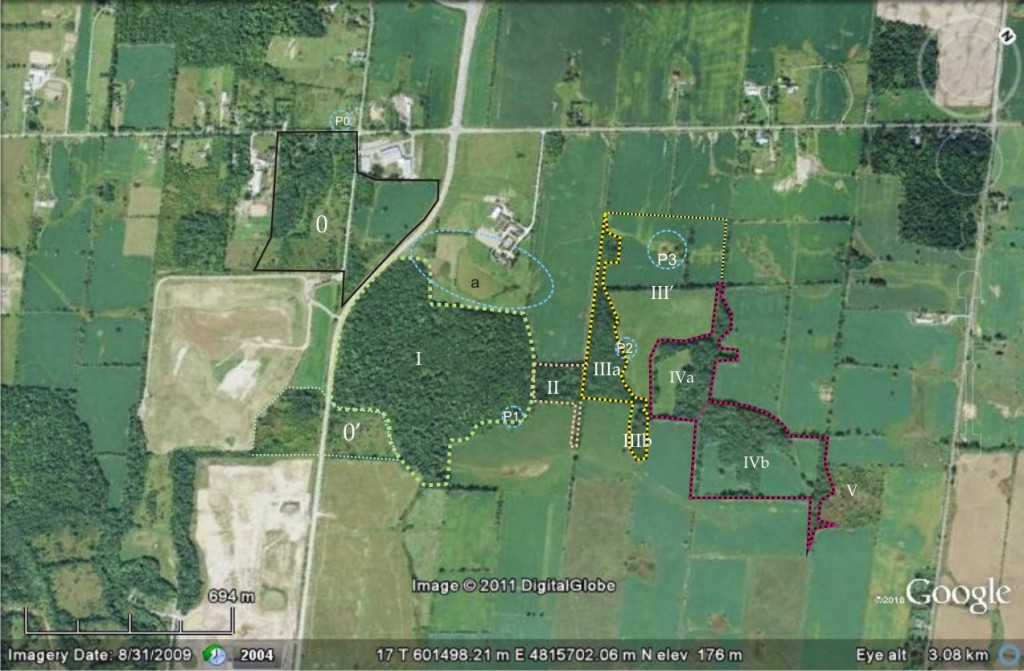 Adjoined to Polygon II is a triangular section identified as Polygon IIIa, itself attached to a small extension labelled IIIb. The rest of the patch, Polygon IV, is made of an oddly shaped forest fragments (labelled IVa and IVb) and includes some encased surrounding open fields. Surveying of Polygons III and IV indicate that these polygons can be integrated into a single woodland structure with more or less homogenous characteristics in vegetation types and disturbance history. Both are mesic environments isolated from Polygons I and II by a predominant south-easterly aspect and a drainage connected to the marsh to the east of them.

Polygon V – at the east end of the Neyagawa Forest Complex, is a mixed landscape unit made of a Phalaris-Mana grass-Cattail marsh flanked by wet shrub/young tree meadows. Polygon V will be described in a separate report. Small tree covered units of land have been traditionally indicated by the term woodlots. The Neyagawa system, however given its size and complexity, lays at the boundary between a woodlot and a forest remnant. Because of its potential to maintain ecological functional diversity in the area, its diversity of interconnected woodlands, swamps and marsh structures, as well as its future reintegration into a natural system, I will be denoting this system as a forest remnant complex and not as a collection of woodlots. The label is important because of its connotations for the exploitation of resources (woodlot) or for the conservation of tree cover and biodiversity.