The importance of the local hydraulics will be described first for it is perhaps the most important abiotic factor affecting the vegetation communities in this forest remnant patch. The general structure of the land in this whole area is that of an undulating and rolling upland characteristic of the Halton till plain[i]. The landscape in this area slopes down from a maximum height of about 190m at the top of the Trafalgar Moraine north of Burnhamthorpe southwards down to 160m at the level of Dundas Street. Based on the hydrologic study of 1977[ii], and more recent descriptions in the North Oakville Creek Sub-watershed Study (NOCSS)[iii], the groundwater movement in the area of the Neyagawa forest patch flows in a south eastern to eastern direction, meeting up with the 16 mile Creek at several locations. The direction of the creeks in all this area corresponds with the alignment of most of the remaining glacial fluting evidence in the area3. Groundwater elevation contours are between 175 to 160 meters above sea level between Burnhamthorpe and Dundas. Terrain elevations between those two roads are in the range of 179 and 156 meters above sea level, indicating the depth of between 4 and 5 metres from the surface to the groundwater levels2, a depth that correspond with the thickness of the Halton till in the area3. 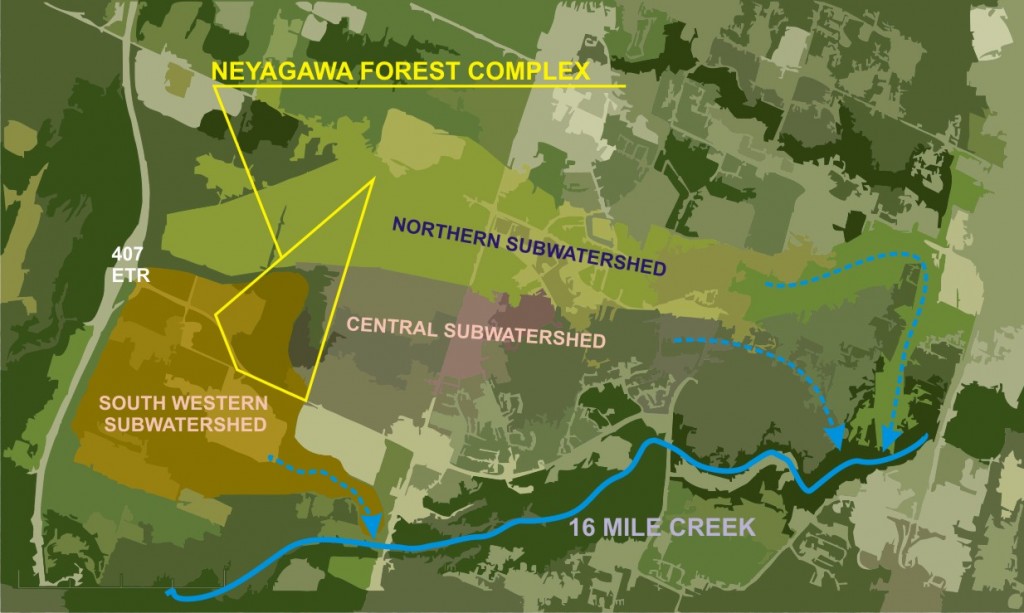 The NHS forest has a general eastward aspect and is bound by the crests of such undulations in its northwestern and southeastern sides. Its surface waters are drained by three separate sub-watersheds (Figure 2). Most of Polygon I and Polygons II and III, drain predominantly towards the 16 Mile Creek via the stream S1 (Figure 3.). The drainage of the lands to the northeast of Polygon I and the water collected by the water management pond (“a” in Figure 1), gives rise to S1. All these small streams are part of one of two of the East 16 Mile Creek tributaries. The original path and watershed of this tributary has been altered since the 1950’s by the development of a Landfill, the rerouting of 4th Line/Neyagawa Road, and the delineation of the 407ETR highway. The stream S1 enters Polygon I at its northern edge with Neyagawa Road, and bends back out of Polygon I further south crossing Neyagawa Road (see Figure 3). Eventually S1 continues along the south eastern edge of the now closed Landfill to eventually drain, north of the Trafalgar Lawn Cemetery, into the 16 Mile Creek (southwestern sub-watershed in Figure 2). Along its course through Polygon I it is evident that the S1 stream banks have been shaped by flooding events that have eroded its banks and carved an advancing flooding plain. 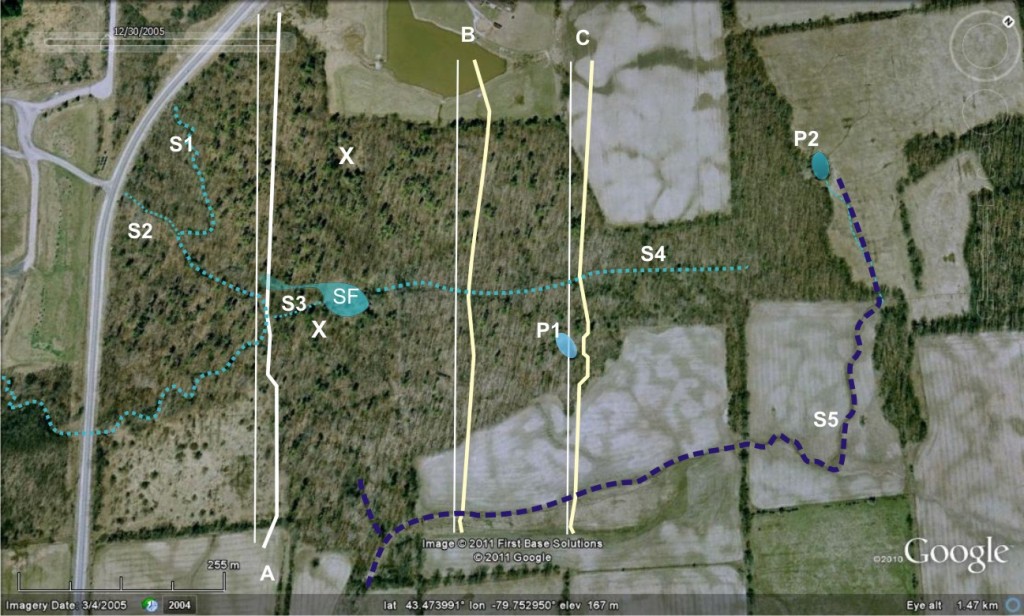 The north-western edge of Polygons I and II with the fields of the present day horse farm (northwestern crest) one finds the highs point of this woodlot complex corresponding to the peak of a terrain undulation. The centre of the NHS forest corresponds; on the other hand, to the trough of the undulation (see transects B and C in Figure 3). Along this through, a marsh – swamp area developed that flows southwesterly towards a central sedge fen (SF), from where it drains through a small stream (S3) into the S1 stream (Figure 3). The flow of water here follows the natural inclination of the terrain.

The lands along the eastern edge of Polygon I and II, together with the adjacent fields, a Pond (P2) , as well as, the old orchard ( ? in Figure 1) drain separately via the stream S5 that together with other draining brooks forms Shannon Creek (Figure 2 and Figure 3). Shannon Creek meets the 16 Mile Creek just before the QEW ( central sub-watershed in Figure 2). The rest of the forest patch (Polygon IV) drains through the marsh (polygon V) towards West Morrison Creek and into the 16 Mile Creek just south of the previous drainage (northern sub-watershed in Figure 2)

The sedge fen and associated vernal swamps, at the core of Polygon I, is the most distinctive feature of the Neyagawa Forest Remnant Complex. This area was identified by the MNR as a significant wetland with in the consideration of the Neyagawa Complex beng designated as an Area of Natural and Scientific Interest (ANSI 7)[iv]. The fen and swamps are home to Green/Red Ash, Silver and Red Maples, Bur Oak, and Rock Elm. Largetooth and Trembling Aspen clusters are present to the south of the fen. The swamps, and eventually the fen, are fed by the small streams formed by the runoff flowing from the adjacent fields northwest to Polygon I and the area labelled as Polygons II and III. The sedge fen drains through a small south-western stream (S3) towards the main stream S1 of Polygon I (Figure 3).

Characteristic of the Halton landscape in the region east of the 16 Mile Creek is the presence of small oval depressions (moraine pits) that serve as water collectors that eventually feed the aquifers below. This pit ponds are deep (in some cases as much as 4 to 6 feet), remain filled for most, if not the whole year round, and unless by human action, do not have particular draining channels. These, stand in contrast to the many shallow depressions found in the area. These wet to water filled depressions originate from poor drainage spots in the physiography of the local Halton till. Most of these shallower ponds when left exposed by clearing readily dried out or are in initial to advanced stages of secondary succession – some of them functioning as shallow marshes or ephemeral pools and important bird habitats. In covered areas, these slow draining depressions form an important part of the ephemeral and swampy areas that characterize the ground in the local woodlots. 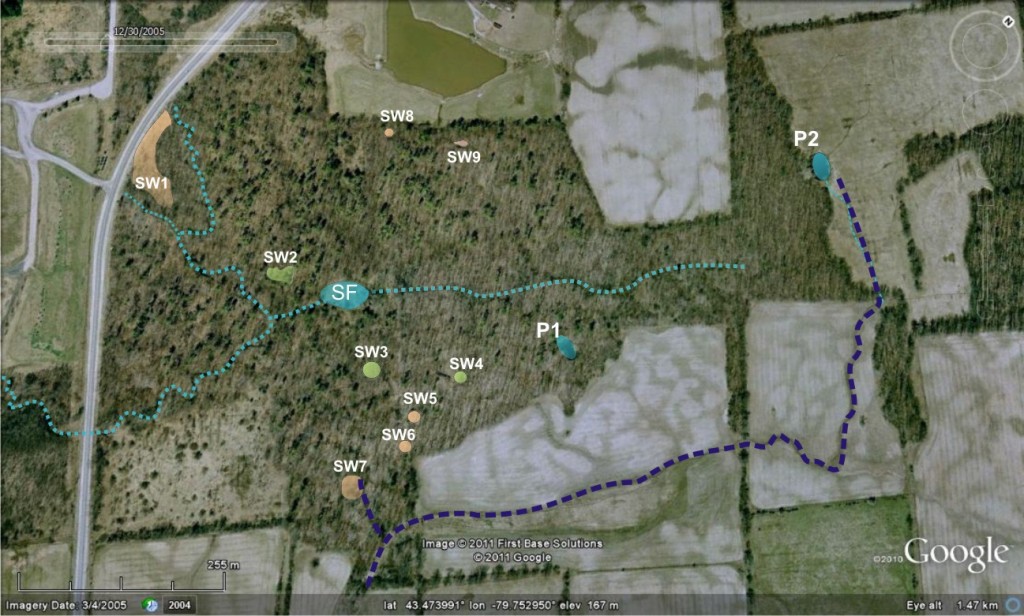 The detail of the stream network associated with polygons I, II, and III can be appreciated in the aerial flyby of the spring of 2007[1]. It displays a network of streams that drain the northern fields, webbing themselves through the forest towards the south. It also shows the presence of an extensive network of streams, swampy areas and ephemeral/vernal pools throughout Polygon I, a fact attested from ground observations. Figure 4 indicates the location of larger ephemeral ponds and swampy areas (SW1 to SW9). It is throughout these wet areas that one is more likely to find isolated specimens or patches of ferns. SW1 is the largest swampy area. It receives its water from road runoff and from stream overflow. SW7 is a small vernal swamp under a single storeyed deciduous forest stand. The rest (SW5, SW6, SW8, and SW9) are smaller ephemeral pools dominated by a Asedge grass@ cover, enriched in mosses and with various amounts of exposed ground due to washed off leaf litter. Although, not indicated in the map, smaller (3 to 6m in diameter) Asedge grass@ enriched spots can be found scattered throughout the polygon pointing to the presence of an abundance of ephemeral wet spots.

Within the boundaries of Polygon I to Polygon III there are two pit ponds (P1 and P2 in Figure 3 and Figure 4). Pond P1, is one of those ponds still within the forest structure that remains seemingly unaltered by human activity. It receives water only from precipitation and there is no evidence of a channelled drainage. It is peculiarly located in one of the highest points in the forest complex – the terrain drops sharply down about seven meters only 30m to the east of it and otherwise, slopes slowly down the same height on its northern, western, and southern banks (section D in Figure 3). Like the central sage fen, this pond is a unique feature of the Forest Complex and the only true vernal pool.

The second pond, P2 in Figure 3, is located at the northern edge of Polygon IIIa and through human action drains outside the forested area down into Shannon Creek via the stream identified as S5 in Figure 3. It is possible that some of the open forb enriched enclaves found in the forest patch (the largest marked with an X in Figure 4) might be remnants of such ponds – now well into secondary succession for there is no clear evidence of tree clearing nor tree death in those areas.

As described above (see Figure 1), Polygon IIIa itself drains towards Polygon II and from there into the central sage fen of Polygon I. The northern section of Polygon IVb is a swampy area that drains Polygon IVa and IVb towards the marsh in Polygon V. No other sites for potential vernal pools have been found in these two polygons. A particular landscape characteristic of these two polygons is their extensive edge perimeter due to their irregular shapes and their association with hedges.

[1]Access to the March 28 2007 GoogleEarthTM image of the area displays clearly the general hydrological surface network that characterizes this forest patch as a mixture of hygric and mesic habitats. (picture link)

[i].              The cultural till plain extends southeast from the escarpment and consists of silky clay materials. It=s surface is gently undulating to rolling and rests on shale bedrock. The till is up to 40 inches thick in some areas with a relatively low permeability. AA hydrologic study of environmentally sensitive areas in the region of Halton@. 1977. Ecologistics Ltd. & Conestoga-Rovers Ltd.